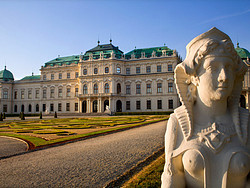 Vienna is the capital and largest city of Austria, and one of the nine states of Austria. Vienna is Austria’s primary city, with a population of about 1.8 million (2.6 million within the metropolitan area, nearly one third of Austria’s population), and its cultural, economic, and political centre. It is the 7th-largest city by population within city limits in the European Union.
The city lies in the east of Austria and is close to the borders of the Czech Republic, Slovakia, and Hungary. These regions work together in a European Centrope border region. Along with nearby Bratislava, Vienna forms a metropolitan region with 3 million inhabitants. In 2001, the city center was designated a UNESCO World Heritage Site.
The historic center of Vienna is rich in architectural ensembles, including Baroque castles and gardens, and the late-19th-century Ringstrasse lined with grand buildings, monuments and parks.