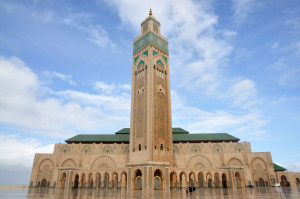 Casablanca, almost universally referred to as ‘Casa’, may be the cosmopolitan, industrial and economic heart of Morocco . The modern city of Casablanca was founded by Berber fishermen in the 10th Century BC and was subsequently used by the Phoenicians, Romans, and the Merenids as a strategic port called Anfa. The Portuguese destroyed it and rebuilt it under the name Casa Branca, only to abandon it after an earthquake in 1755. The Moroccan sultan rebuilt the city as Daru l-Badya and it was given its current name of Casablanca by Spanish traders who established trading bases there Casablanca is now Morocco’s largest city with a population of almost 4 million and also boasts the world’s largest artificial port. 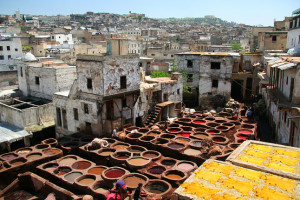 Fez is the enduring cultural and spiritual center of Morocco, North Africa’s last remaining kingdom Fez is the medieval capital of Morocco founded by Idris I (who is believed to have descended from the prophet Muhammad) in 789, and a great city of high Islamic civilization. Fez has the best-preserved old city in the Arab world, the sprawling, labyrinthine medina of Fes el-Bali, which is incidentally also the world’s largest car-free urban zone. 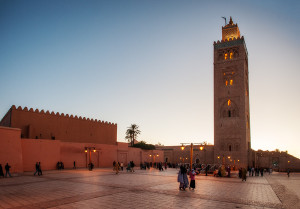 Marrakech is a major city of Morocco. It is the fourth largest city in the country, after Casablanca, Rabat and Fes. It is the capital city of the mid-southwestern region of Marrakesh-Asfi. Located to the north of the foothills of the snow-capped Atlas Mountains, Marrakesh is located 580 km southwest of Tangier, 327 km southwest of the Moroccan capital of Rabat, 239 km south of Casablanca, and 246 km northeast of Agadir. Marrakesh is possibly the most important of Morocco’s four former imperial cities (cities that were built by Moroccan Berber empires). The region has been inhabited by Berber farmers since Neolithic times, but the actual city was founded in 1062 by Abu Bakr ibn Umar, chieftain and cousin of Almoravid king Yusuf ibn Tashfin. In the 12th century, the Almoravids built many madrasas (Koranic schools) and mosques in Marrakesh that bear Andalusian influences. The red walls of the city, built by Ali ibn Yusuf in 1122–1123, and various buildings constructed in red sandstone during this period, have given the city the nickname of the «Red City» or «Ochre City». Marrakesh grew rapidly and established itself as a cultural, religious, and trading centre for the Maghreb and sub-Saharan Africa; Jemaa el-Fnaa is the busiest square in Africa. 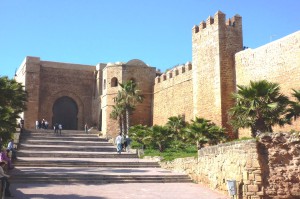 Rabat is the capital of Morocco and its seventh largest city center with an urban population of approximately 580,000 people and a metropolitan population of over 1.2 million. It is also the capital of the Rabat-Salé-Kénitra administrative region. The city is located on the Atlantic Ocean at the mouth of the river Bou Regreg. On the facing shore of the river lies Salé, the city’s main commuter town. Rabat, Temara, and Salé form a conurbation of over 1.8 million people. Silt-related problems have diminished Rabat’s role as a port; however, Rabat and Salé still maintain important textile, food processing and construction industries. In addition, tourism and the presence of all foreign embassies in Morocco serve to make Rabat one of the most important cities in the country. 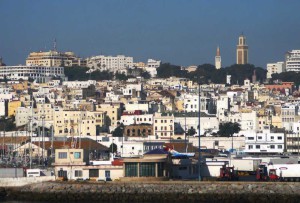 Tangier and sometimes referred as Tangiers, is a major city in northern Morocco. It is located on the North African coast at the western entrance to the Strait of Gibraltar where the Mediterranean Sea meets the Atlantic Ocean off Cape Spartel. It is the capital of the Tanger-Tetouan-Al Hoceima Region and of the Tangier-Assilah prefecture of Morocco. The history of Tangier is very rich, due to the historical presence of many civilizations and cultures starting from before the 5th century BCE. Between the period of being a strategic Berber town and then a Phoenician trading center to the independence era around the 1950s, Tangier was a refuge for many cultures.